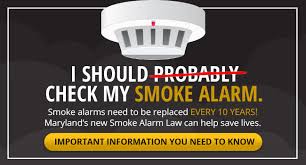 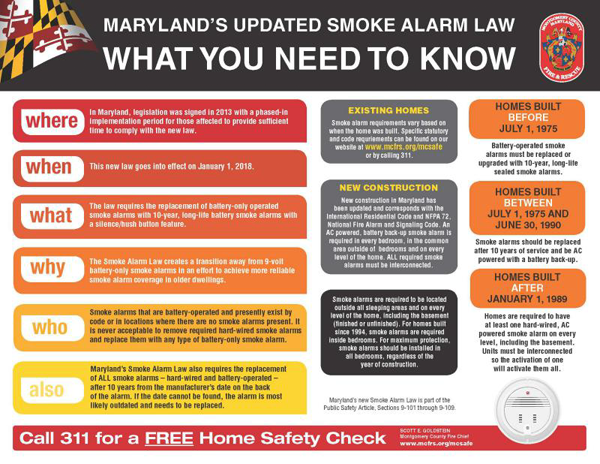 This Month I would like to cover Smoke Alarms… This has been an issue in Maryland with all the new laws concerning such. While they mostly stay out of your mind, smoke alarms and smoke detectors play a big part in keeping your home and family safe. But while they’re pretty necessary, they can also be one of the most annoying things on this green Earth when misbehaving or malfunctioning. Is your detector beeping ceaselessly?  Is it 10 years old or older? When was your house built? Are you planning on selling or doing any renovations.  in many of these cases, it is time to update your smoke detectors to the current laws in Maryland!

Fire and Rescue personnel are frequently the only smoke alarm “experts” the general public will meet. The department’s Safety in our Neighborhood and After the Fire programs have been very effective in the State purpose of this Blog is to provide information on  Maryland’s new Smoke Alarm Law, its impact in the State and each County, the differing smoke alarm requirements based on when a home was built and the newer smoke alarm features available on the market which include long-life batteries and hush/silence
buttons.

Maryland is the most recent state to require that homeowners:

2. Upgrade smoke alarm placement in existing residential occupancies to comply with minimum specified standards.These standards vary according to when the building was constructed.

The deadline for compliance with the new law is January 1, 2018.

The intent of the new Smoke Alarm Law was to transition away from smoke alarms with 9v batteries and to achieve as much reliable smoke alarm coverage as possible in older dwellings. Smoke alarm technology has advanced over the years and the updates to Maryland’s Smoke Alarm Law are part of a nationwide trend to ensure new and replacement smoke alarms have the most effective technology available. The new law heavily emphasizes the use of sealed smoke alarms with long-life batteries and silence/hush buttons. However, it is critical to understand that these devices are appropriate only where battery-operated smoke alarms presently exist as permitted by Code or in locations where no smoke alarms are present. It is never acceptable to remove required hard-wired smoke alarms and replace them with any type of battery-only operated device. Smoke alarm requirements are based on when a house was built and the specific statutory and code requirements for residential smoke alarms can be found on most county websites.

A summary of the important provisions of the new smoke alarm legislation is provided below.

Maryland’s Smoke Alarm Law requires the replacement of all smoke alarms when they are 10 years old. This applies to both hard-wired and battery-operated smoke alarms.

Maryland’s new Smoke Alarm Law requires the replacement of smoke alarms when they are ten years old (ten years from the date of manufacture). This replacement requirement is already in the adopted State Fire Code, reference to the 2007 version of the NFPA 72 National Fire Alarm Code (Chapter 10.4.7) which was the first to specify that no “household” smoke alarm (battery or AC) shall be kept in service for any longer than 10 years from its date of manufacture. Earlier versions of this Code had directed consumers to follow manufacturer recommendations. The Maryland State legislation now mirrors the code requirement that has been in place for six years. It was determined that including this wording again in State Law would effectively re-publicize the existing “10 Year” replacement requirement for residential smoke alarms and result in the widespread replacement of older, nonfunctioning or unreliable smoke alarms. The date of manufacture, while sometimes hard to locate, should be printed on the back of smoke alarms. If no manufacture date can be located, the alarm is likely outdated and should be replaced to comply with the regulation. Baltimore County has begun to enforce replacements with every new permit that is pulled inside a residential home.

The smoke alarm requirements for existing homes are based on WHEN the home was constructed. As a result, the requirements are sometimes confusing and therefore it is critical to determine when the house was actually built to determine the level and type of smoke alarms required. In existing homes, the National Fire Protection Association (NFPA) only requires a smoke alarm outside the sleeping area and one on each level of the home. However, it also recommends that existing homes be equipped with at least the same number of smoke alarms required in new homes which includes smoke alarms present inside all sleeping rooms. The department’s position is consistent with the recommendation for new home construction.

Maryland’s Smoke Alarm Law has simply been updated to correspond with the International Residential Code and NFPA 72, National Fire Alarm and Signaling Code. An AC powered, battery back-up smoke alarm is required in;

1. every bedroom, within 5ft of the door

2.  in the common area outside of the bedrooms

3. and on every other level of the dwelling unit, with all of the required smoke alarms being interconnected.

The requirements for smoke alarms vary depending on when the residence was constructed.

Immediate replacement/upgrade is required when any of the following events or situations occur:

Smoke alarm coverage in older homes constructed prior to January 1, 1989, must be upgraded to at least one approved smoke alarm on every level of the older home when any one of the
following first occur:

A. The existing smoke alarm is more than ten years old.

B. The existing smoke alarm fails to respond or otherwise malfunctions.

C. There is a change of tenant.

D. A building permit is issued for an addition or renovation.

During the 2013 session of the Maryland General Assembly, the existing thirty eight year old Maryland Smoke Alarm Law was amended and updated to take advantage of new technology. Senate Bill 969 and House Bill 1413 passed unanimously and were signed into law by Governor O’Malley effective July 1, 2013. The goal of the new Maryland Smoke Alarm Law was to achieve as much reliable smoke alarm coverage as possible in older dwellings without ever requiring a homeowner to run new wiring. It was believed that any provision in the law which would have required hiring an electrician, obtaining an electrical permit, tearing up, patching and

repainting, etc. would have never passed the legislative process and would have never been enacted into law. The primary intent of the new Maryland Smoke Alarm Law was to transition away from battery-operated smoke alarms powered by 9v, removable batteries. Historically, homeowners have removed batteries to silence the alarm when cooking or when the alarm’s “low battery” chirp occurs. Despite the best of intentions, many of these batteries never got replaced resulting in many loss of life fires in homes having smoke alarms with dead or missing batteries. It was envisioned by officials that both of these problems could be solved as the State transitions to sealed smoke alarms with a “hush” feature. The hush button will temporarily silence an alarm due to a non-emergency activation and the alarm will automatically reset after a few minutes. In the
event of actual or sustained fire. A low battery chirp will occur only at the end of the alarm’s projected ten year lifecycle.

The conclusion of the Maryland Smoke Alarm Technology Task Force was that both ionization and photoelectric smoke alarms are listed to Underwriters Laboratories Standard 217 and are
perfectly acceptable early warning devices which have been responsible for saving many lives.

Enforcement and the Law

One and two-family dwellings units are exempt from the State Fire Prevention Code and fire authorities have no legal right of entry into individual occupied dwellings to verify that smoke
alarms are present and operational. It is therefore important for personnel to inform the public of the critical need to upgrade the smoke alarm coverage in their homes.

Yes. The residential property disclosure form provided to the purchaser of specified single-family residential real property must include whether the smoke alarms (1) are over 10 years old and (2) if battery-operated, are sealed, tamper-resistant units incorporating a silence/hush button and use long-life batteries as required in all Maryland homes by 2018.

While the new, sealed, smoke alarms with long-life batteries and hush features will cost a few more dollars at the time of purchase, money is actually saved over the expected ten year life of the device since there is no longer a need to purchase new 9v batteries every year.

Landlords of one-and two-dwelling units also face new requirements. They must upgrade battery smoke alarms to new, 10-year sealed battery units whenever there’s a change in occupancy or when those systems are 10 years old or malfunction. Landlords for buildings with more than two units also are affected. The legislation assigns tenants of those units responsibility for testing the smoke alarms and notifying their landlords of any problems. Where problems occur, the landlords are required to replace or repair the broken systems.